In memory of my good friend Barbara Bond. A kind soul who cared for everybody.

Dust off your books back to school

You’ll live forever in my heart

Life is a voyage a long trail

We succeed and often fail

Walking with you was fantastic

In a summertime of magic

A season I journeyed with you

I wish you skies ever blue

You’re gone but often near

Though the weather’s unkind

Your still here in my mind

And I say to you today

But they weren’t positive I was positive

I could still be negative

Which is a positive way to look at something negative

Two negatives do not make a positive

Just like two holes don’t make a hill of dirt

We use a backhoe and a dump truck

Otherwise, I could be wrong

I don’t want to be negative

But then again, I do

I try to be positive

And then again, I don’t

But there’s always an exception to the rule

Of that I am positive

I gazed upon eternity

And found myself lacking and small

I asked God who is greater than all

“It’s enough to be my child”

Easy for Him to say

A grain of sand won’t block the mighty Mississippi

The world will go on without me

The body perishes but not the soul

I’m not trying to be negative

Joe Hill tuned into groovy groves of Jesus of Nazareth

A martyr in Utah he kept the faith until his death

Convicted by a jury of peers based on fabricated lies

Somewhere in the Oklahoma prairies Woody caught the breath

We had to defeat Nazi Germany a victory to be won

But in the end friend fascism was far from done

So, Peter came with mild fame painted in red shame

Silencing by choice any voice in the land of the free

We can see the outer limits but not our own hypocrisy

In Graystone U. the venerable saint wasted away

The young dreamers bowed to the idol of the day

Zimmerman had a plan and thus the torch passed

He had the zeal but the money was the real deal

Hey I can play, but love goes beyond what you feel

And so, we sacrificed the spirit of seventeen seventy-six

At the Newport Folk Festival while going electric

So, the Master Pimp prostituted his clever verse

The divine line so fine between blessing and curse

But Joe looks down from the Rocky Mountain high

As evangelicals scorn salvation and we slowly die

Who cares who we kill capitalism by nature is cruel

There’s an American dream but it’s not my prayer

Hit the score, fuck the whore, is there something more

I went to the nursing home tonight the visit my wife

Must I mention dementia is such a horrid plight?

We are a nation of winners accepting sinners

All that matters is being on top, rule one to beginners

So, if you’re down in the Super Bowl after the long haul

It doesn’t really matter if you deflate the football

Whatever happened to going out and having some fun?

Or enjoying some exercise in the glorious sun?

While in unceded lands in Grandma’s northwest

And where are the pop stars as we slowly die?

How come Mister Bob Dylan doesn’t give a cry?

Joe Hill would be on the picket line raising righteous hell

Woody Guthrie would have some rambling story to tell

Pete Seeger would be strumming his banjo overtime

And COVID just kill Anne Feeney such a crime

But Bob got some blonde big breasted bimbo to get laid

And good old Neil knows the deal divorcing his wife

The two shall become one until the selfish cutting knife

God gave talents to one five, to the next two to the final one

So good sir I humbly ask at your task what have you done?

Don’t you know all that you possess is by grace?

In the trenches hear the lamentable scream

Excuse me sir, don’t let me spoil your rock and roll dream

Or impinge on your most honorable pride

I might not be the cleverest rhymer on the block

You’re still a prostitute no matter what the price

So, with a touch of obscurity, I declare you’re it, tag

Cause you see the legacy is supposed to be yours

Could you just please speak out against endless wars?

While Joel Osteen builds himself a solid gold steeple

“You will eat, bye and bye”

“In the glorious land in the sky”

“Work and pray, live on hay”

“You’ll get pie in the sky when you die”

Money is a fictitious number on the computer screen

And James Johnson just died, do you dig the scene?

In death the rich and poor are identically the same

And God, good sir, counts score in His game

And I look at the sky gray, as if stained by ink

I go to the rivers, so foul I cannot drink

I see mountains of plastic floating in the ocean

While pop stars with gold guitars bow in devotion

To the god of mammon

Yes, I know I said it before

I just hate to be defeated

And some things are worth being repeated

The legacy, why it’s nothing but serving the highest call

I won't go down silently. Well, I'll type stuff. You know what I mean! Free your mind and the body won't be long behind. Try being kind and you'll find what you're looking for.

The merchants of greed are sharpening their blades

Don’t you know that profits soar when there’s a war?

It’s a trick that’s been used many times before

They made our rivers their private open sewer

While the wild life’s getting fewer and fewer

They saved a dollar and destroyed Mother Earth

When there’s nothing to eat what’s your money worth?

See the fake news is on every channel

Go and sing the blues this is our funeral

Real soon thinking will be the worst kind of crime

All the poets today they can’t even rhyme

I am the resistance as I sing this song

Together I know we can right every wrong

When we have life there’s hope for a better day

Oh yes my friend a better day so I pray

I had a dream I made a love machine

It didn’t pollute it was fully green

My machine made thoughts and prayers become real

The only fight that is right is for the ideal

It runs on nothing the engine is clean

Peace was declared all wars came to an end

The worst of enemies embraced as friends

Rich misers sold all and gave to the poor

I knew that all of this was fantasy

That I would wake up to dark misery

I would put the love machine in my heart

That in this wicked world I would do my part

So here I am singing this simple song

If you hear it please try to right a wrong

Love is the finest thing we have in this place

So show a little mercy and show some grace

Check out my book of song lyrics "Without The Music" 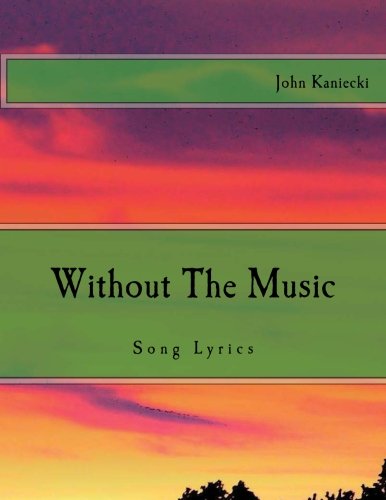 Posted by John Kaniecki at 6:09 PM No comments:

My wish for Christmas

Is peace on Earth

Wasn’t that the promise

At our dear Lord’s birth

For peace on Earth I pray

We need it to survive

Join with me today

Peace only comes from Love

Not from guns and war

Do you know where I’m coming from

Become part of the cure

God in heaven wishes us well

We are His children one and all

He Loves us more than we can tell

Join the cause of peace, heed the call

My wish for Christmas

Is peace on Earth

Wasn’t that the promise

At our dear Lord’s birth